Yay! Made it to the Alaskan Arctic Circle!

Only problem was when Pup and I got done stretching our legs from reading the displays…the van wouldn’t start! One crank, two crank…luckily on the third crank the van fired up.

Now what? I’m about 200 miles from Fairbanks at this point and I’m at 1/2 a tank of gas. The van gets around 400 miles on a full tank. Question is continue north into no mans land hoping the van starts or begin heading back to Fairbanks calling the Arctic Circle sign a win?

I doubt my AAA covers the remote frozen tundra…time to double back!

You have to leave a card inside to be able to pump. As I was walking back in to get my card I met Yukon Jeremy. He said to go down and check out his gift shop and his mom was down there. “One of a kind Alaskan gifts”, he said.
I was more worried about if my van would start after the scare up at the Arctic. Luckily it fired up perfectly!?! I drove over to the little shack that had the words ‘Mostly Birch’ painted on it.

I met Yukon Jeremy’s mom Dorthy. She was organizing the knick knacks. There were animal jaws made into little sleds with little Eskimos made out of fur. Necklaces Dorthy made from shells and necklaces. Also necklaces Yukon Jeremy made from bear/wolf/wolverines and a few others toenails or teeth. Fur hats, and other stuff.

I chatted with them a bit about before trying to race the midnight sun to find a spot for the night. If you’re ever up the Dalton Highway stop by and let Yukon Jeremy tell you a few stories…you won’t be disappointed!

They let Pup and I in to Canada!

Not much different from the states when it comes to cities. Although the measuring system is taking some adjustment but lucky for me time is on my side! My trail running experience is coming in handy with distances. A few people I have met that have recommended trails mention how many “K” the trail would be. I have a good guesstimation of what I’ll get myself into for distance.

My first day in Vancouver was rainy so I took a drive tour of the city. Cruising through downtown my first stop was Stanley Park. In between heavy rains I would jump out get some photos. Great views of Vancouver can be had all through the park. During the rain and cloudiness the downtown skyline was visible but not the mountains on the other side of the park.

After roaming the park I decided to go check out a recommendation from a Instagram friend. Of course it’s still raining when I got to Lynn Canyon but noticed the Park Rangers office was open so I stopped by to check on the weather. Not having data service is kind of a nagging thorn as I travel! The Rangers on duty were awesome. We chatted about vanlife, travel and then the weather. Tomorrow is suppose to clear by the afternoon!

Over the last two years my eye has become accustom to seeing good spots I can possibly park for the night. So along Mt. Seymour Pkwy I noticed a spot I would come back to for the night. A quick walk with Pup at Cates Park and linking to Starbucks wifi from my van it was time to call it a day.

Heck yeah only a lite rain! Sitting at Lynn Canyon I debated if I wanted to run first or take Pup for a hike and get some photos. Not long into my debate a handful of mini vans pulled up, loaded with kids. They all walked into the nature center so that was my que for the photo-op. When I got to the bridge no one was there but a girl who asked if I’d take her picture. As I waited for her to cross I snapped a few photos of Pup on the empty bridge.

About the time I finished a guy with a bushy red beard wearing bright running clothes began to cross. I chatted Marcus up about running and local races. After crossing the bridge I met up with Oleisha again. Pup was off leash and ran up to her as she was getting some video of the creek. She was from the part of Canada I didn’t get to see since I didn’t have my passport, Ontario. Our conversation turned into hiking all of Lynn Canyon together.

By the end of the trail the sky was blue and the clouds were puffy white! As I was leaving I ran into the three Park Rangers again. They asked where I was headed next? North to Alaska of course!

Officially checked off state #49 with a beautiful run on Kuliouou Ridge Trail!

The view was pretty legit from the top but the different vegetation you wonder through on the way up made the trail even better.

The bar was set pretty high for trails on Oahu after this run. Lets see what else Hawaii has to offer! 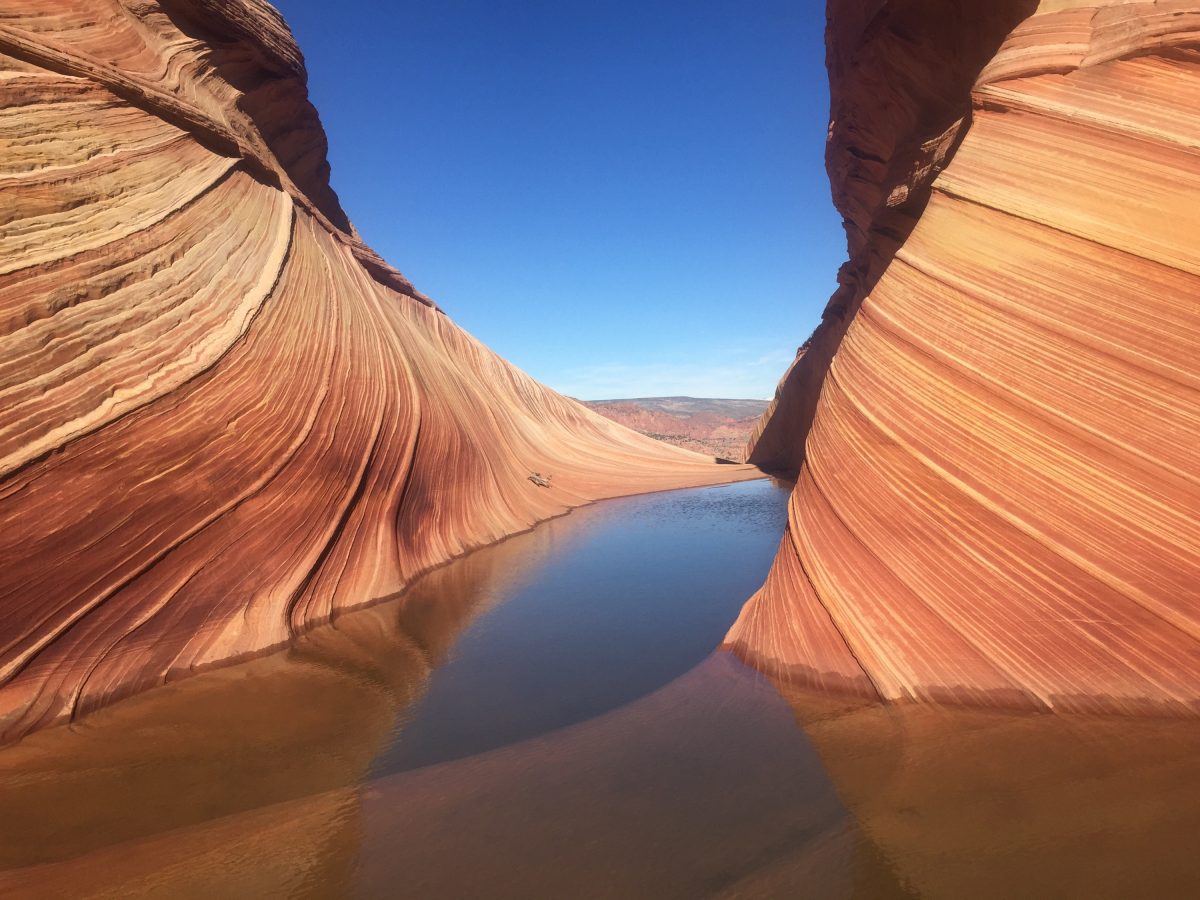 A Day at The Wave

If you have been following my journey on my JAdRunning Facebook page then you know I’ve been traveling for a year now. The Wave has been on my list since day one! The beauty of this highly sought after sandstone rock formation draws hikers and photographers from all over the world to get a permit.

At the time of my writing this, the hike to The Wave is limited to only 20 people/permits a day. Ten permits through an online lottery months in advance and ten “next day” in person lottery permits. The rules are pretty simple for the in person lottery and you can find the rules with the link (BLM Wave Website).

I showed up to the Grand Staircase-Escalante National Monument Visitor Center in Kanab, Utah at 8:30 am after parking the night at the gas station across the street. We listened to a little spiel from the Park Ranger about the dangers of the hike before going into the lottery room. Each group then fills out an application and is given one number no matter the size. So let’s say the number of a group of six gets called…then only four permits are left of the ten.

The Ranger makes a joke about our odds of getting picked is pretty good compared to other days because it was a rainy night with snow in the morning. Only 29 people were there for a chance to hike the next day. The record of people the Ranger said was 254! I was feeling lucky on my first Wave lottery. You could feel the tension as the Ranger drops the numbered balls into a bingo wheel. He spins the wheel and calls the first number and two people cheer loudly! “They’re still nice people but their group is for 5 so there are only 5 permits left” the Ranger chuckles. The second and third numbers are called…both to a group of two.

This now leaves one permit. The Ranger then explains when this happens he allows an extra permit because he doesn’t recommend hiking alone. But, if the number called is for a group of more than two they would have to decide to pass or leave someone behind. “It could put a strain on some relationships,” he says. He spins the wheel and the last number drops…number 12? I motion a low fist pump to my side and let out a subtle YES! Then I say, “Well I saved everyone’s relationship…it’s just me.” The hint of laughter after my comment seemed to be more of an, ‘I hope you roll your ankle’ than a ‘that was a funny joke.’

With it still raining through the day we were cautioned that only 4×4 would get us to the trailhead via the clay back roads. That didn’t stop me. Once I found out there was a free campsite only a mile from the trailhead I set out to venture the roads. I decided to come in through the south after being told the roads were better that way. It would be an extra 45-minute drive but I’d rather be there than miss this hike. The last two miles of road to the campground were a sloppy mess but manageable if driven right. Pup and I explored  around the little campground  and as sunset neared I got everything ready for the morning adventure!

So if you’re compiling a list of must see places I recommend putting The Wave in Arizona on your list! Pictures will never do justice for the beauty Mother Nature holds!

Dogs aren’t allowed on the trails here so I had to do my runs in the early morning. First night we had a great view spot of Nugent Mountian to camp. It was also close to Pine Canyon Trail which leads to a waterfall. Pup and I hung out trying to stay cool in the shade of the van. Shade is very limited to find in the park.

Woke up early and ran 4.6 miles round trip to the waterfall on the Pine Canyon trail. Not much of a waterfall but it was trickling/flowing good for a TX desert waterfall. After my run pup and I explored the scenic drives in the park. Dogs are only allowed on roads so we stopped often on the backcountry roads to stretched. Drove from Boquillas Canyon all the way to Santa Elena Canyon, which are opposite sides of the park. Crazy to see views like this in Texas!

On our last day I woke up early to run to the highest peak in the park, Emory Peak. Woke up 15 minutes before sunrise to get to the trailhead at Chisos Basin Village. The view of the peaks as we drove was overcast and cloudy. Emory especially was not visible from the start. Most people would be disappointed but I was relieved. The overcast would keep pup cool in the van incase the forest service mileage was wrong, which it was. Total miles to the rock scramble peak of Emory from the Village was 11 miles vs the 9.8 I originally thought. My view at the top was pure clouds, cool breeze and solitude.

Not in if for the views, I am in it for the adventure!

Maroon bells may be as picturesque as you can get in CO. It’s a huge tourist attraction drawing hundreds if not thousands of people a day. So beautiful and popular that the National Park Service doesn’t allow cars to drive up to the top between the hours of 8 AM – 5 PM. It is only accessible by a (dog friendly) bus ride to the top during the day.

Of course I picked one of the busiest weekends at Maroon Bells to try and run here. Since there is color on the trees folks come from all over to get a picture. This made me have to wake up at 6 AM to get a spot at the top, even at 6AM the lot was filling up quick.

Pup and I chilled in the van til the sun started to light up the darkness. I then walked around to stretch pup as I focused on the run. After meeting a few runners the night before I planned on running up West Maroon Trail for about ten miles.

Maroon Peak is a 14er and surround by several other 14ers as you are in the meadow near Cater Lake. With the high altitude, breathing is still tough for me while running upward. But I managed to get 11 miles on this beautiful trail.

I also had my second moose encounter with a very curious young bull that was b-lining it to the lake.

If you are in the Apsen, CO area a stop at Maroon Bells is definitely worth your time.