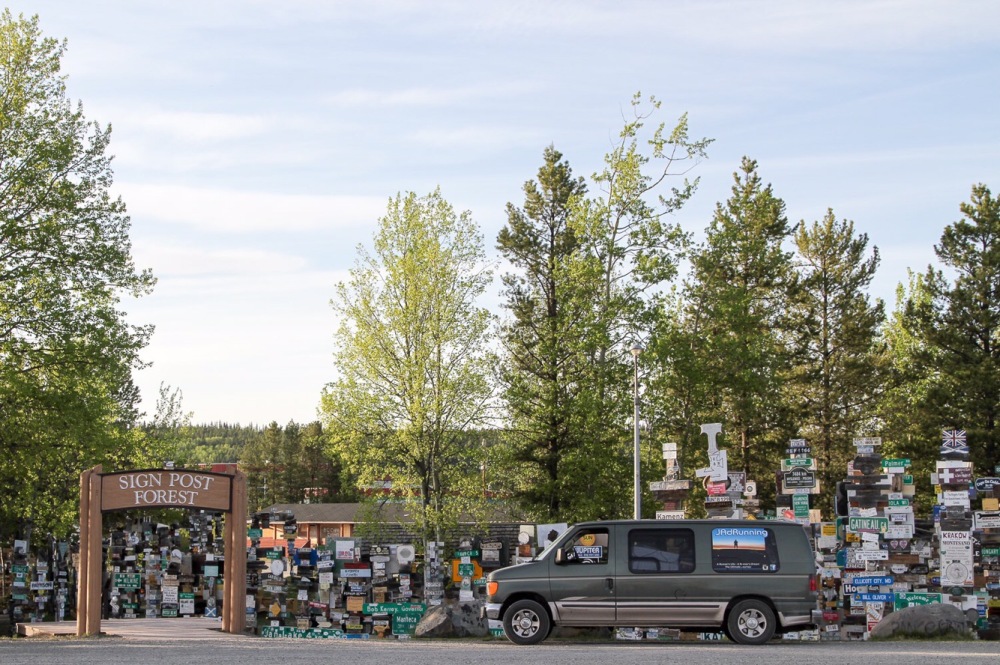 I don’t plan anything really. Maybe a few things here and there but generally I look at a map and drive. Along the way I stop when I see something that looks like fun. So to my surprise I find Signpost Forest in Watson Lake. A famous stop along the Alcan/Alaskan Highway where people from all over the world bring a sign to hang from their home town.

The tradition was started by an Army of Engineers Private that was injured while working on the highway. He was commanded to repair and repaint the directional sign outside of Watson Lake. During this repair he placed a sign of his own from his hometown in Illinois which began the start of Signpost Forest. Around 72,000+ signs are scattered throughout more than two acres and I didn’t bring anything!? 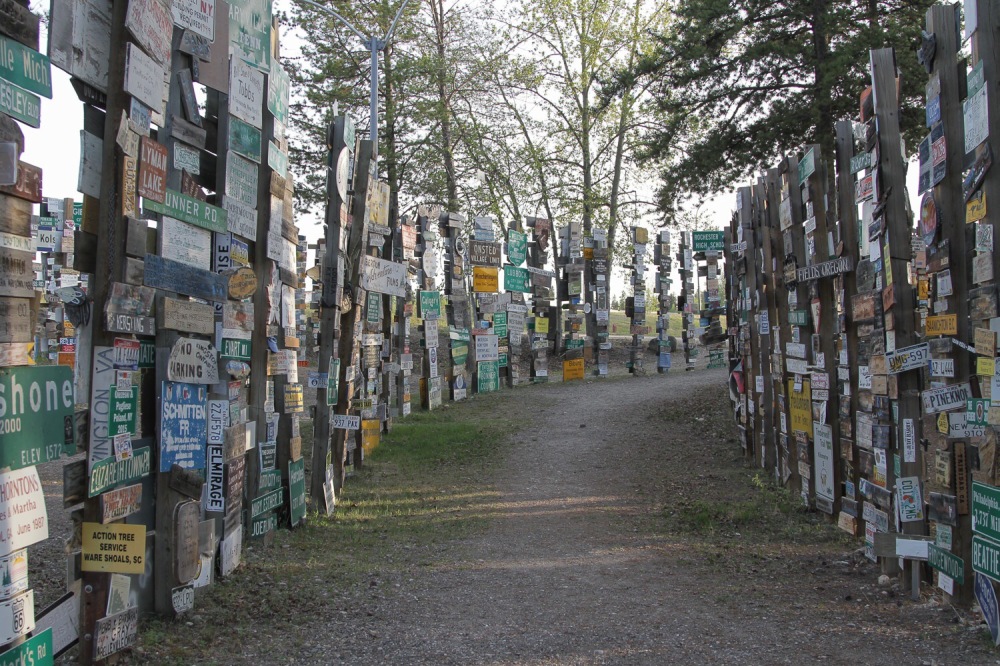 I met a couple from Nevada that were doing a three month retirement/anniversary trip to Alaska. Her parents have a sign up somewhere in the masses that she couldn’t find. As we talked I watched them hang their own sign to commemorate their trip.

Dang it, I wish I had a sign to hang! I roamed the rows and rows with Pup looking at signs. Then it hit me…I have a sign!

I open the back door of the van and dig through my bins. Yep there it is…Jayden St! Heck yeah! I find a spot that has an opening to fit the small street sign shaped plaque. At least Pup will have his own sign hanging up to carry out his fluffball legacy in the World Famous Signpost Forest!

Do you or someone you know have a sign up at Signpost Forest?

I pull into the Nairn Falls Provincial Park parking lot outside of Whistler, B.C. and go to the end that is shaded. As I park I see a young scraggly bearded kid sitting at a picnic table eating. Leaning on the table is an older red road bicycle loaded with what looks like everything he owns. 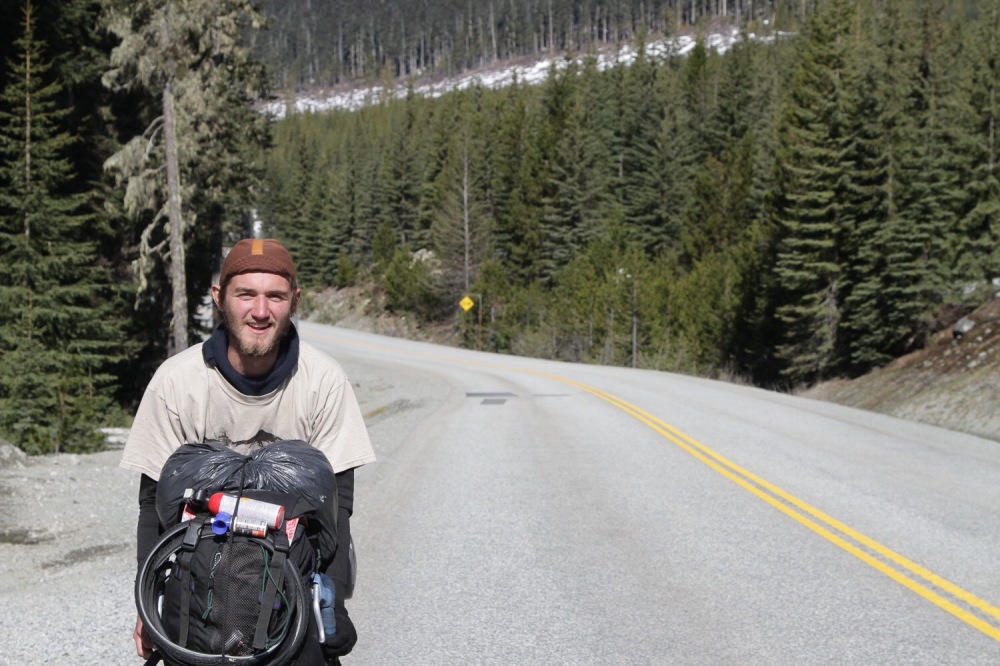 The path through the picnic area leads to the short 1.5K trail to the falls. Pup being Pup, runs up to the kid thinking he will get butt pets or food. I apologize for Pups pushiness and ask if he is riding cross the country? He replied that he started in Las Vegas and was only going as far as Whitehorse, Yukon right now. He put a lid on his rice, grabbed an apple and banana and asked if he could hike with us (us being me and the Pup).

Our story swapping led us to the waterfall before we officially introduced ourselves. His name is Jesse. Being from Wisconsin his lust for living simple was just that, simple. At the age of 22 he has biked a lot of the lower United States. Returns home, saves up some money, regroups and hits the road on his bike. Sure wish when I was his age I wasn’t driven by money and material things.

We say our safe travels farewell and I take off for Joffre Lakes Provincial Park. I enjoy a crazy snow packed trail run/hike to upper Joffre Lake and Mt. Matier Glacier. After bombing the snowy down hill, with intermittent ski sessions, back to the van I hear someone say my name. It’s none other then Jesse! 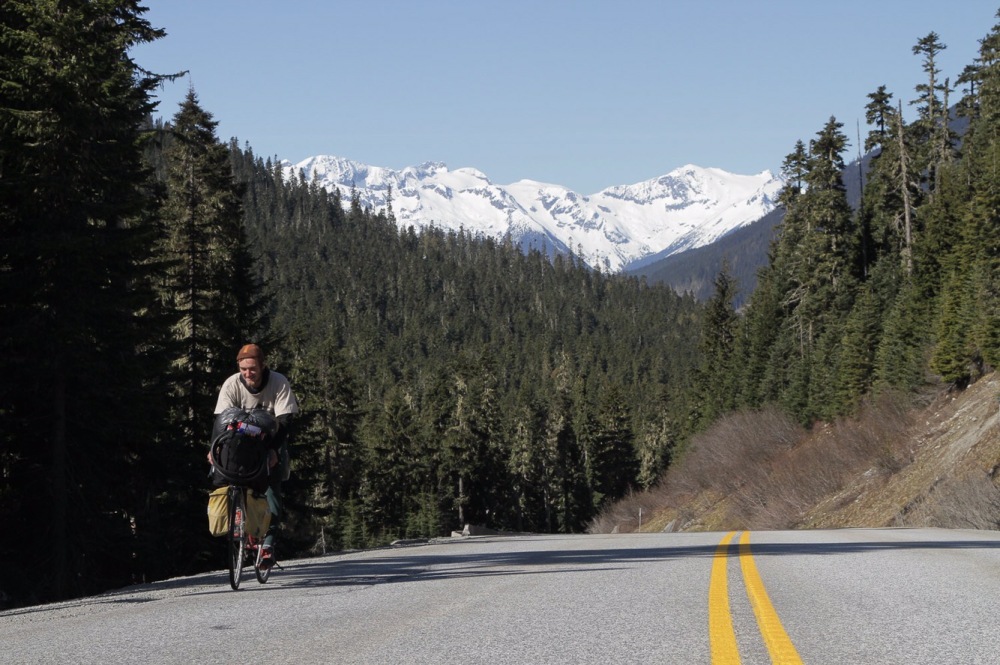 “Dang kid! I was just thinking of where you were…how did you make it this far so fast!”, I yelled at him. The drive is only 22 miles from where we met but the whole way is straight up (13% grade)! We were both going to setup camp at the trailhead for the night. Jesse though, he was sleeping under the night sky in a sleeping bag on the lower lake view point. Total dirtbag! 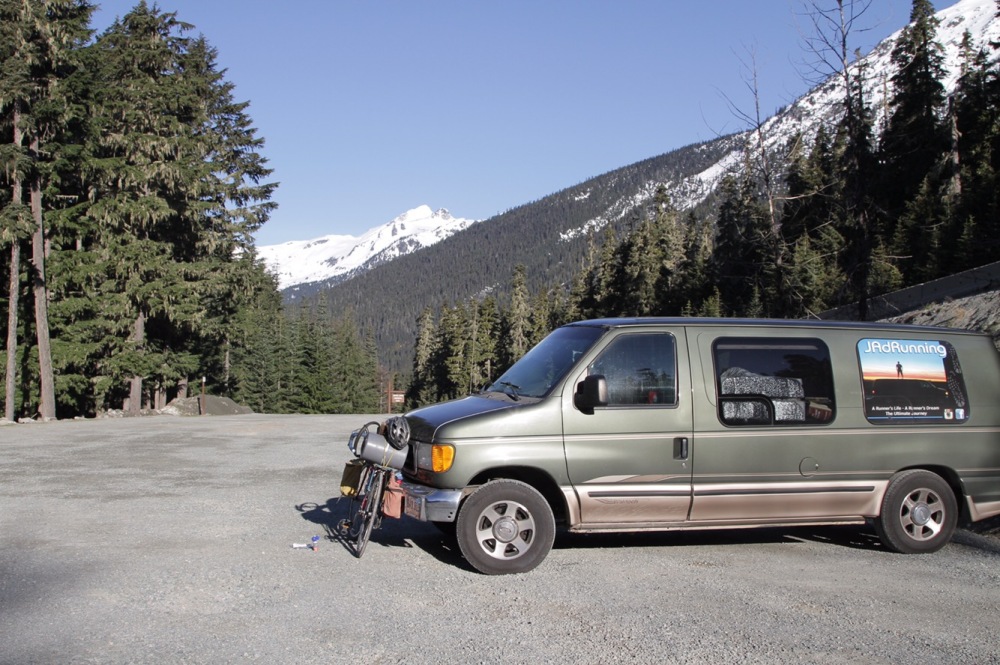 I wake up to Jesse’s bike leaning up against the front of my van. I see him drying out his sleeping bag from the morning dew in the sun. He is usually up extremely early in the mornings. Sleeping under the night sky comes with the early morning sun waking you up. We exchange contact info before saying farewells again. I have a strong feeling our paths may cross again!

There was a semi narrow snow packed trail leading the way, but do not step off the path or you’ll sink waist deep. I learned this quickly when I stepped off to let a couple pass in only the first 100 meters to the lower lake view point. I decided then to run the short distance back to the van to get my slip on cleats. The trail is a short 5K/3.1 miles to the upper lake with 1300+ feet of climbing, 10K round trip hike. 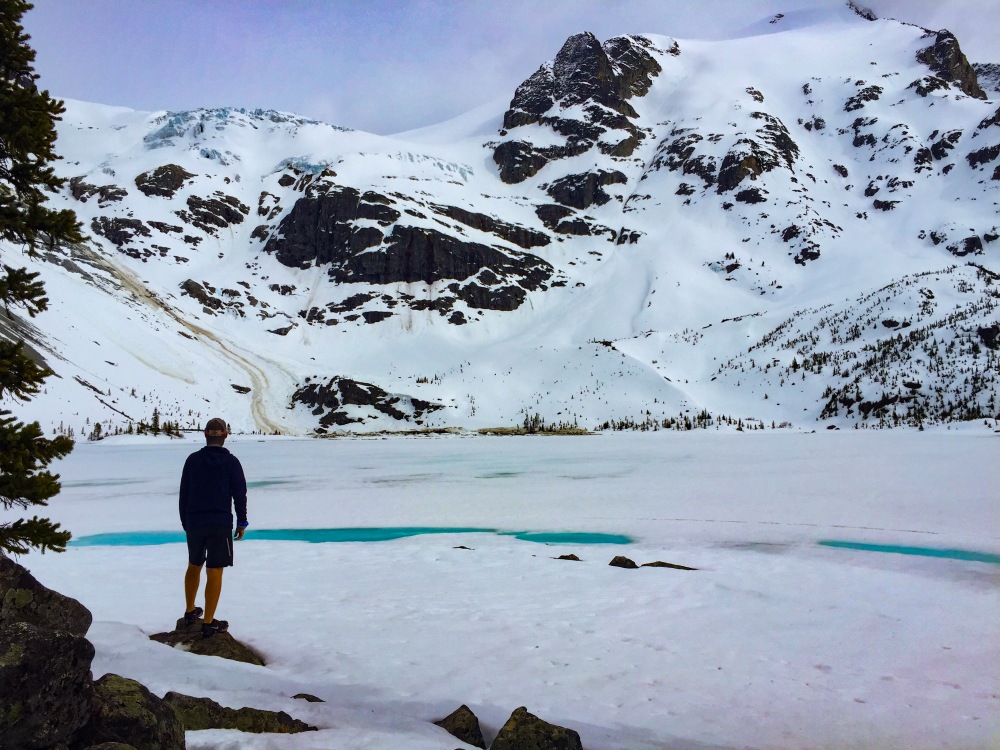 I’ve never tried to run up a mountain on a super narrow trail with snow and ice. Some parts of the trail were also slushy so coming down was almost like skiing. I’ve seen some glacier in the Lower 48 as I traveled but nothing like the one like Mt. Matier’s with the beautiful light blue glow in the middle. I have video of the run/hike too so I’ll post that once I get it clipped together. 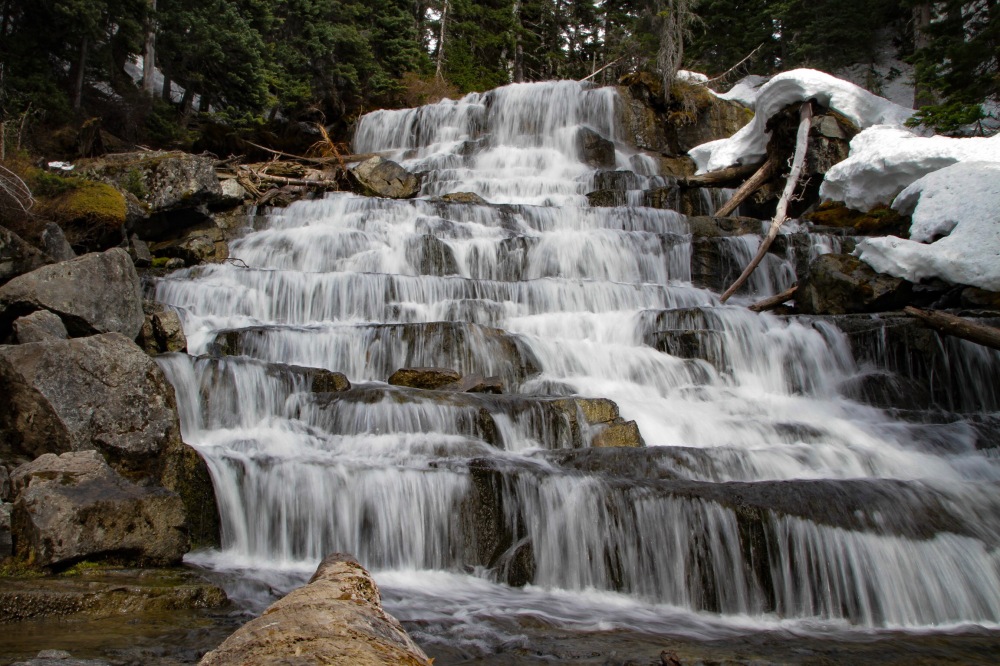 Between the middle lake and upper lake there is an amazing waterfall. This cascade made the pain of climbing much more worth it! So hard to show the true experience in photographs but it’s always worth a try!

They let Pup and I in to Canada!

Not much different from the states when it comes to cities. Although the measuring system is taking some adjustment but lucky for me time is on my side! My trail running experience is coming in handy with distances. A few people I have met that have recommended trails mention how many “K” the trail would be. I have a good guesstimation of what I’ll get myself into for distance.

My first day in Vancouver was rainy so I took a drive tour of the city. Cruising through downtown my first stop was Stanley Park. In between heavy rains I would jump out get some photos. Great views of Vancouver can be had all through the park. During the rain and cloudiness the downtown skyline was visible but not the mountains on the other side of the park. 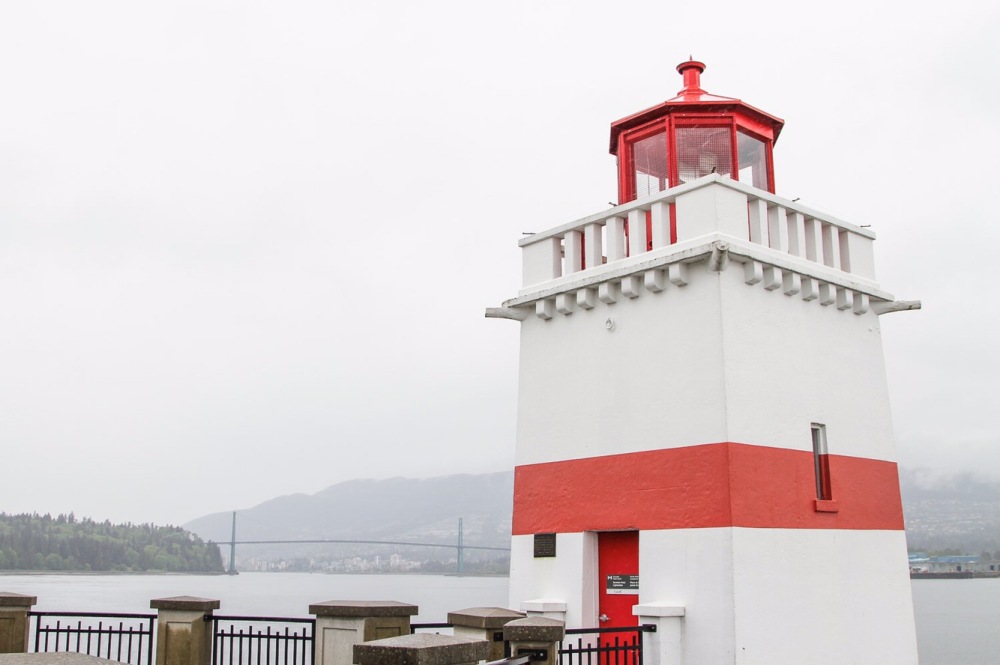 After roaming the park I decided to go check out a recommendation from a Instagram friend. Of course it’s still raining when I got to Lynn Canyon but noticed the Park Rangers office was open so I stopped by to check on the weather. Not having data service is kind of a nagging thorn as I travel! The Rangers on duty were awesome. We chatted about vanlife, travel and then the weather. Tomorrow is suppose to clear by the afternoon!

Over the last two years my eye has become accustom to seeing good spots I can possibly park for the night. So along Mt. Seymour Pkwy I noticed a spot I would come back to for the night. A quick walk with Pup at Cates Park and linking to Starbucks wifi from my van it was time to call it a day.

Heck yeah only a lite rain! Sitting at Lynn Canyon I debated if I wanted to run first or take Pup for a hike and get some photos. Not long into my debate a handful of mini vans pulled up, loaded with kids. They all walked into the nature center so that was my que for the photo-op. When I got to the bridge no one was there but a girl who asked if I’d take her picture. As I waited for her to cross I snapped a few photos of Pup on the empty bridge.

About the time I finished a guy with a bushy red beard wearing bright running clothes began to cross. I chatted Marcus up about running and local races. After crossing the bridge I met up with Oleisha again. Pup was off leash and ran up to her as she was getting some video of the creek. She was from the part of Canada I didn’t get to see since I didn’t have my passport, Ontario. Our conversation turned into hiking all of Lynn Canyon together.

By the end of the trail the sky was blue and the clouds were puffy white! As I was leaving I ran into the three Park Rangers again. They asked where I was headed next? North to Alaska of course!